Nomay was my first and only female cat for many years.  We affectionately called her our ‘baby girl’. But no matter if they were male or female or cat, or dog or human, Nomay was in charge of everyone and had been since the day she came home. She is above all else a people cat.  Preferring to be the only cat, she would be happy to be the only pet.  She tolerates the others but loves the attention of her humans.  Her primary objective is to head-butt your arm, your hand or your face. But she is always moving when giving out her love. This is part of the reason, she is my least photographed animal in the house.  I see her sitting pretty, grab the camera and she’s already getting up or walking over to me to head-butt me. 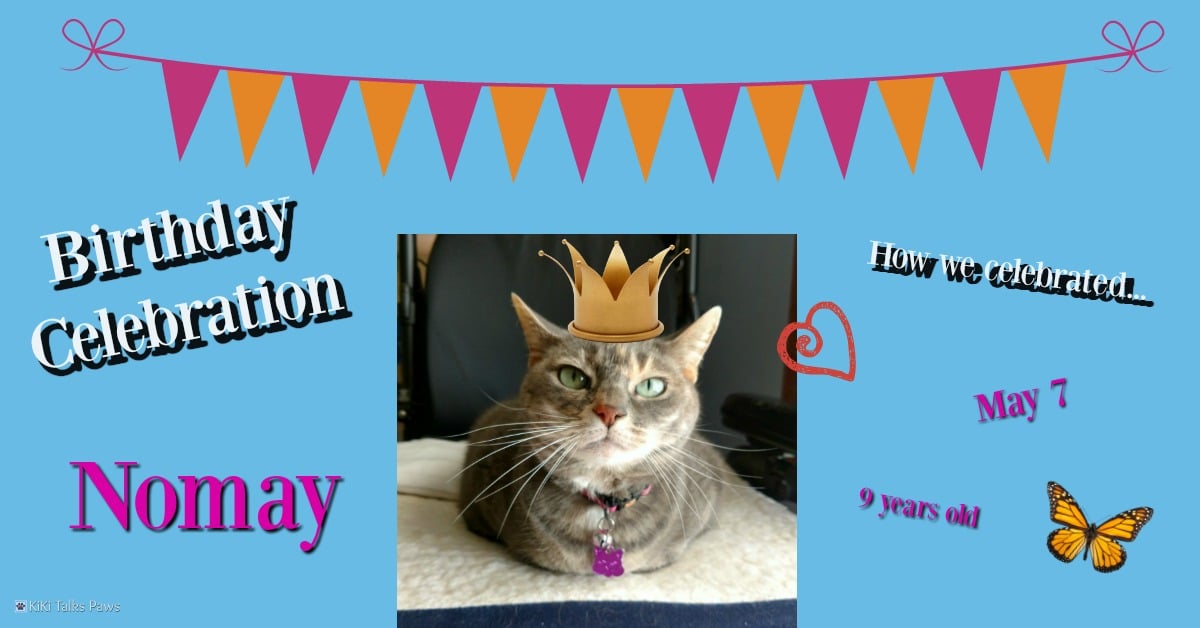 Choices for her Birthday Celebration

Nomay gets lots of love on a daily basis.  Finding her a special item or activity for her birthday is difficult.  She only eats dry food, since she pukes up any type of wet food that we give her.   In the car too long, she gets car sick.  She cuddles with me on the couch almost every night.  She used to enjoy treats, but that brings all the older cats to the party and Alex is not allowed because of his bladder issues. 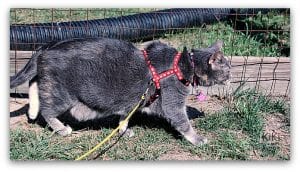 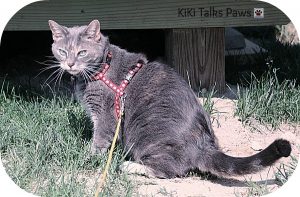 Finally, I decided to take Nomay outside in the yard on her harness.  She loves to roll around in the grass. Eat the grass. And explore every inch of the space.  I questioned whether I should do since Nomay is the only cat that actively tries to leave the house.  She escaped our present house twice and accomplished it numerous times in our previous home. Luckily, she doesn’t go far.  But most times she escapes without anyone noticing. She ends up outside for several hours. This is the reason I had her microchipped.  I still don’t like it, because anything can happen.   She could be attacked by another animal or she could wander away.  She is so affectionate, I could see her being welcomed into another home without looking for her true owners.  I do my best to prevent her escape, but she always seems to find a way.

Nomay’s birthday was a fairly nice day for May.  She took a stroll around the yard. But like most cats, she doesn’t appreciate the fact that I am following her by holding onto her leash as she explores.  I give her the longest leash I have, but it’s still not good enough for her. Being in the yard wasn’t good enough for her, as she attempted to go under the fence.  This caused enough wiggling that she started to come out of her harness.  She had a good 20 minutes of exploring and rolling in the grass before trying to escape her confines. 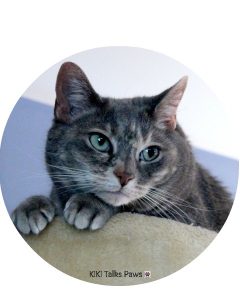 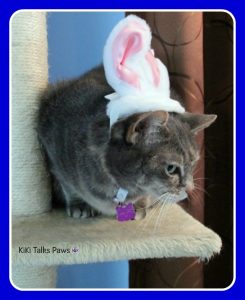 She seemed pooped from her outside excursion, so she relaxed on ‘her’ tower.  We bought the tower for all the cats, but she controls access. Remember I said she was in charge!  She sat on the very top. I guess she wanted to get away from me. I had made her try on some ‘hats’ I found when looking for her harness.  See her in the bunny ears below. Doesn’t she look cute!

Later that evening, I brought back to life one of her greatest joys, playing with toy springs or twist ties.  This activity never lasts long because she undoubtedly always pushes the toy under a large appliance. I gave her a little plastic spring that has been hiding in their toy box in the cat room.  They have access to the toys, but no one attempts to play unless a human is involved.  The majority of my cats are getting up there in age, so I guess I can’t blame them.  The dogs end up stealing the toys and eating them if they are anywhere but the cat rooms.

Nomay is so funny when she plays.  She can go from sitting completely still too full speed running around like a nut without any warning. It happens very fast and then her burst of speed stops. I did manage to get this very short video of one of her bursts.  Quality is not very good and I apologize for that.  But I wanted to show you her bursts.  This is also how she runs when the dogs chase her.

Nomay’s 9th Birthday Celebration was a success, although, she has taken to sitting by the sliding glass door for an opportunity to dash out.  Luckily, the dogs keep her in line by chasing her back into the room. Nomay never learned that ‘running cats’ produces ‘chasing dogs’.  She is good with them if they are eye level with her, but if she hits the floor, she’s on the move.  She runs very fast for a girl starting to get up in age.

If you enjoyed seeing Nomay’s Birthday Celebration, check out 7 Ways to Celebrate Your Pet’s Birthday.