My youngest cat and overall youngest pet in my zoo turned two years old on Aug 10.  She’s the last of my pet birthdays for the year. And I am so glad she’s out of the 1-2-year-old stage.  Kittens between 1 and 2 years old act like rebellious teenagers. It’s also the time that defines their personalities.  Quinn’s personality as a small kitten was very strong and likable.  I was scared that she would lose this. 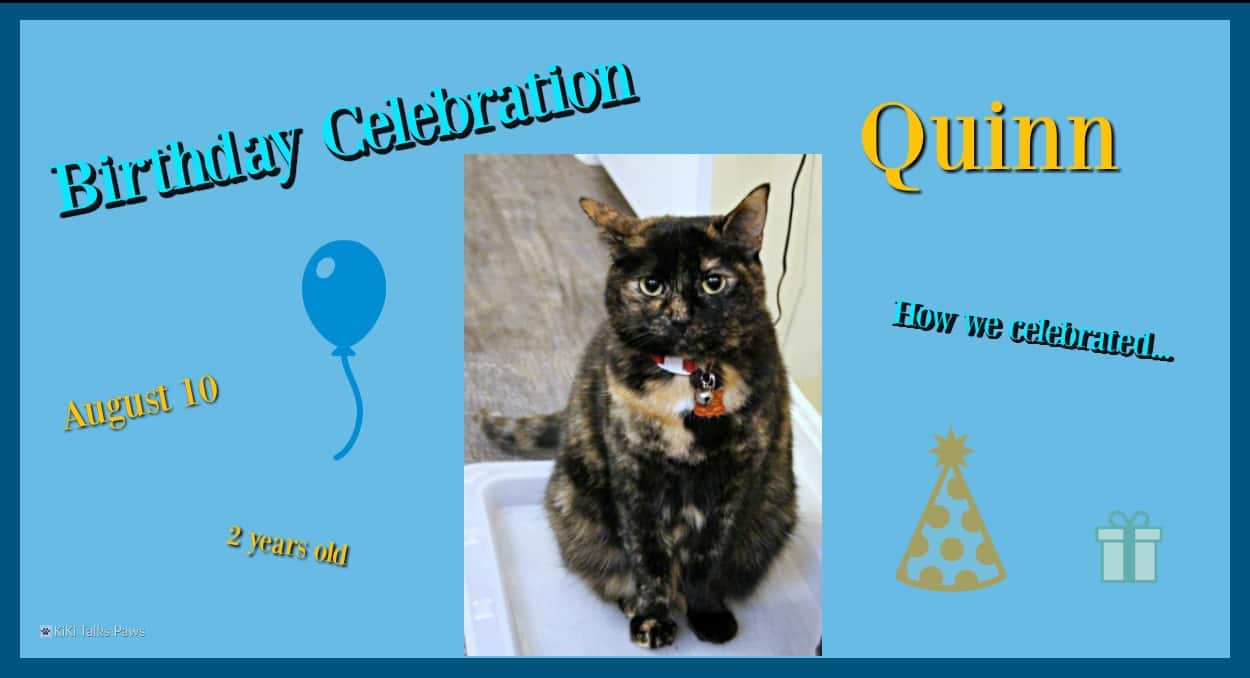 Quinn produced a calming effect for the household

When Quinn entered our lives as a part of the family, she left a calming effect on the household that had seen much chaos.  The current cats did not accept new cats into the family.  Even introducing the new puppy, Elliot, did not bond the remaining cats in the house.  At least not until Quinn showed up.  Quinn was loved by all cats and dogs immediately.  She was confident and determined to be loved. In fact even from day number one, she loved the dogs much more than the other cats. Quinn thinks she’s a dog and prefers to follow them around all day.  Unfortunately, she doesn’t understand when they play a little rougher than she does. 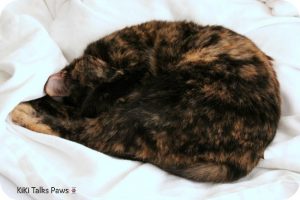 Quinn’s routine is consistent but still a little haphazard.  She does the same thing for several days to a week and then she switches everything and does that for several days.  Number one on her list of things to do, however, is sleep.

Typical cats sleep 16-20 hours a day.  Quinn is quite young, but for some reason does a fair amount of sleeping.  I think she’s just bored since her next closest cat sibling is 4 years older than her.  Her favorite sleeping spots are curled up with on my father-in-law little legs in his hospital bed (he might sleep more than she does), curled up with me around my stomach area, asleep on a pillow on my mother-in-law’s lap or curled up with either of the dogs.  She can also be found on one of the dining room chairs or hangin’ with the boys in the upstairs cat room.  She does not discriminate when sleeping is involved.

For her birthday, I obviously wanted to do something with her besides watch her sleep.  She has two favorite things: new boxes and an old shoestring.

We receive packages at least one or two times per week, if not daily.  We retrieve our packages and place them directly inside the front door in the foyer.  Quinn sometimes sees a package here and sits on it until someone opens it.  Other times, she leaves her favorite sleeping spots when she hears us crack open the cardboard.  Naturally curious, she inspects each box to confirm we are all safe.

As per clockwork, a package arrived on Quinn’s birthday.  My husband says he purposely ordered it so Quinn had a box to play in for her birthday.  Somehow I believe this was all an accident.  The box was immediately hers and all the cats lined up to view her in her box as if she was on display.  She stood her ground and did not let anyone else claim the box.  All the cats (except for Alex) walked by sniffed the box or attempted to play with Quinn in a short period of time.  It was very strange.

Her box remained by the front door all weekend, just so she could sit, sleep or play with it.  It was no different than every other box we received all year, but yet it was the box that appeared for her birthday celebration. 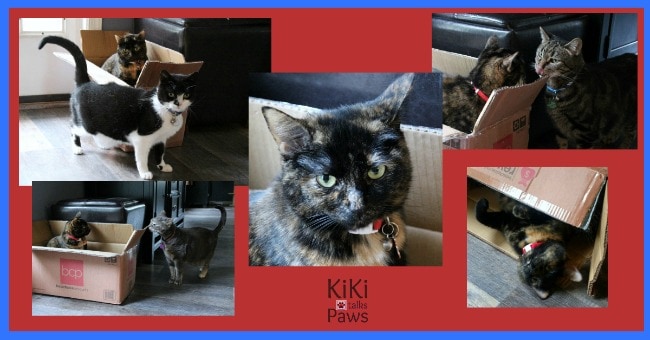 I’m not sure how it all started but Quinn has become obsessed with a shoestring that I pull and dangle in front of her.  I leave it on our bedroom floor and every time I go into the room, I find Quinn sitting by the string waiting for it to get up and dance.  She thinks every time is a good time to play, so she follows me upstairs just on the chance that I go into my bedroom and take the time to play with her.

Quinn knows when we let the dogs out at the end of the night, that shortly, we will be going up to the bed.  This means string play will commence.  Our nighttime play involves Sam & Alex participating as the dogs are already asleep on the bed. Alex & Quinn play the same way. They love a dangling string and slow movement over the carpet.  Sam is a little different. He wants you to whip the string at him as he tries to catch it with his paw or his mouth.

Quinn’s birthday present from me was a full day of playing with her shoestring.  Of course, her birthday ended up being a work day so I took about an hour of my Saturday to get in some intense string playing.  Plus every time I walked by my bedroom, I took the opportunity to sit with her and play.

Saturday afternoon play ended up being Quinn and the pups.  Lexi & Elliot were anxious for some pool time so they were not leaving my side.  Lexi policed the ‘shoestring play’ situation and kept the amount of excitement to a reasonable level. Elliot just watched and waited for pool time.  The presence of both dogs prevented Alex & Sam from playing with Quinn.  The boys just looked on from behind their gate in the cat room.

Lexi didn’t understand the point of chasing a string.  Strings, like all toys, are eaten or possibly knawed on for a time, until mommy throws them out.  Quinn has had this string for months, that so much longer than mommy allows Lexi to have chew toys.

Lexi tried to insert some of her normal play with Quinn.  This usually involves Quinn’s head being in Lexi’s mouth and then a few swats by Quinn.  The scene may be scary for some, but I know Quinn can run away at any time, or even seriously hurt Lexi.  Quinn enjoys the attention even though she looks pissed off with her tail batting the ground.  Lexi means no harm to Quinn.  I don’t worry about them.   However, Lexi & Quinn produce lots of noise when they play.

Quinn’s birthday seems boring.  But let me tell you, she enjoyed every minute of her box and her shoestring.  She’s a wonderful cat and I look forward to celebrating many more birthdays with her.  If you are looking for ideas to celebrate with your pet, check out the post that started this series!