I started fostering for a local rescue in December of 2011.  We had a steady flow of two kittens/cats flowing thru our house.  When a kitten was adopted at one of our adoption days, I would just bring a new one home.  This made it easier to let them go.  You were happy to see them adopted but sad to see them leave you.  However, you couldn’t dwell on your sorrow as there was a new kitten to adapt to your household. 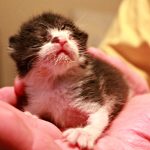 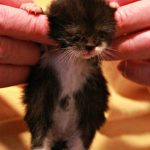 In April of 2012, I saw on Facebook that a coworker had found two kittens in their backyard.  Actually, their dog had found them.  They moved them into their garage for fear of their dog eating them.

On Facebook, they were asking what to do with them and if anyone could get them into a rescue.  With umbilical cord still attached, both kittens were only days old.  I volunteered to take them after I strong-armed our rescue into allowing me!

I named them Ham and Bacon – one was skinny and one fat.

Feedings were every two hours – as I believed they were only five days old.  I thought they were both boys as their anuses were extremely inflamed – and I mistook this for balls.  Like I said, these were my first bottle babies!  And you might ask – Why didn’t I ask for more help?  The advice was readily available, the issue was that no one can really give you advice if they don’t see exactly what you see.  Experience goes a long way in just being able to recognize what could be wrong or what someone else doesn’t notice.  Also, we were a small rescue, where almost everyone had full-time jobs.  There was plenty of distance between us as we fostered out of our own homes and had no shelter space or a place to call ‘home’.  I did my best, but that ended up not being good enough.

It took Bacon only two days to die.  As I look back, he wasn’t getting enough milk and I most likely caused his death.  He was sucking on the nipple of the bottle, so I thought he was getting his milk.  But the hole was not large enough and he spent lots of energy to get only a small portion of milk.  These are the things we learn from fostering! 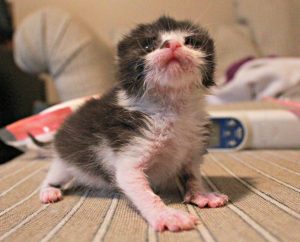 Ham knew no milk was coming out of the bottle, so he sternly refused to drink from the bottle on day one.  I started syringe feeding him and that’s why he survived.  Plus he was probably born with a little extra weight to keep him going, as he was the fat one of the two.

Heartbroken over the loss of Bacon, I blamed myself.  I didn’t realize it actually WAS my fault until much later when I had more experience.  But, I made sure that Ham was not going to die too.  I modified my work schedule and took some time off in the morning and afternoon so that I could continue feeding him. He was a hungry kitty. 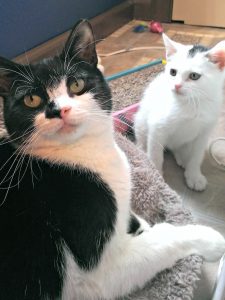 Ham was really a girl

Several weeks went by and Ham grew and learned to run and play.  His balls also reduced in size and I discovered that HE was actually a girl.  So the question became, WAS bacon really a boy too?  I guess it doesn’t really matter anyway, but I will always call him a boy.  We buried him in the backyard of our old house.

Ham continued to survive but had several problems.  She would not poop.  I took her to my vet.  The doctor that I saw was terrible and it was the last time I ever went there.  I had taken Gabe and Ham at the same time.  It was a visiting vet, as I had never seen her there before.  She told me Ham would poop when she was ready and did no tests on Gabe.  This was less than a week before Gabe had his first blockage.  My new shelter friends have only recently explained to me that most powder kitten milk should be watered down more than the instructions specify.  This will help avoid constipation of small kittens.  I strictly followed the instructions on the can!  But as I said the vet was no help.

Ham also developed what I thought was a cold.  She sneezed and gross snot ran out of her nose.  This ended up becoming a chronic problem.  My new vet, saw Ham all the time and kept trying different antibiotics and steroids.  Again another learning experience for me!  Many vets will take animals off of antibiotics and steroids for a time so that their bodies try to fight the ‘cold’ on their own.  Sometimes this does clear it up.  And sometimes another round of antibiotics does the trick.  But this would not have happened unless there was a break.  You learn tricks of the trade as you gain experience.

Ham still has a chronic nose problem to this day.  We give her medicated nose drops and this alleviates things most of the time.  She still produces snot, but not as much as she did most of her life.  She was never sick as she didn’t make any of the other foster cats/kittens ill. 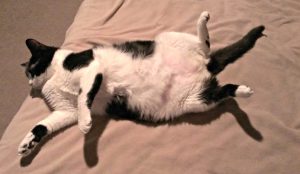 I knew early on that I was not going to be able to give Ham up since I bottle-fed her.  I eventually adopted her from my rescue after we were able to spay her.  Spaying her ended up being a challenge as we used low-cost spay clinics and she always ‘appeared sick’.  Her spay day ended up being a good time for her and she made it thru without a hitch.  She was much older than our normal kittens when spayed, as the rescue was always waiting for her nose to clear up. 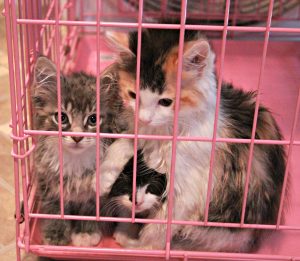 I kept Ham with my other fosters when she was a kitten.  Most of my fosters were also kittens, so this allowed Ham a bit of socialization.  She seemed to get along with any cat/kitten that came to stay with us.  Ham is resilient and survived lots of diseases that passed thru my foster room.  Vets assumed that she had a low immune system since she was snotty all the time.  I really think her problem was chronic and her immune system was just fine.

Ham as a kitten didn’t learn that other animals may be scared of her or not like her.  I tried to integrate her with the resident zoo, but she resisted.  Or more accurately, the others resisted another new cat.  By the time I introduced her, she was no longer a kitten.  Alex could terrorize her!  He did such a good job that all the rest of the cats jumped on the bandwagon.  Gabe was very happy to have Ham in their lives as Gabe was no longer the most hated cat.   Ham and the rest of the cats only started to get along when I moved everyone to another state.  This way, everything was new and no one had seniority at the new house.  Things were still stressful at points, but mostly everyone stayed on their own floor and there was peace.

Once Gabe died, there was a new dynamic in the house and everyone calmed down immensely.  And then after Alex had surgery for his bladder stones, everyone was pretty content living in their sections of the house. 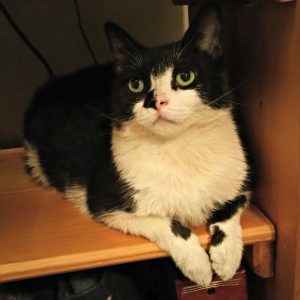