The year before we got Lexi involved lots of changes for our little family.  My husband started a new job at another company out of state.  So our normally hectic life was a little worse.  We found a rental home near my husbands work while I stayed behind in the old house to try and sell it.  And I looked for a job in our new state.

My husband took Elliot to the new rental home because Elliot would be mopey without Daddy.  Nomay followed a few weeks later to keep Elliot company.  The remaining 4 cats stayed with me in the old house.

Eventually, the house received an offer and I quit my job and moved down to the rental.  Job hunting was tedious, but the company that I just quit was able to hire me back as a contractor and I got to work from home.  It seemed like 5 weeks vacation to move and settle things and a slightly different position in my company.

Our house did not sell on the original settlement date.  The buyers had some unforeseen circumstances.  But we sold the house after only a 2-month delay.

After our old house sold, we spent every weekend and some weekdays looking for our new house in the new state.  We had several months left on our lease but we knew that we were picky.  So we started out early and finally found something we both liked.  The settlement was scheduled for the end of May.

As settlement got closer, I knew I wanted a 2nd dog to keep Elliot company.  Elliot is super dependent on my husband and is very sad any time that he is not around.  Elliot & I formed a better bond with me working from home.  But nothing can break the bond between Elliot & my husband.  And I wanted a dog that would cuddle with me. 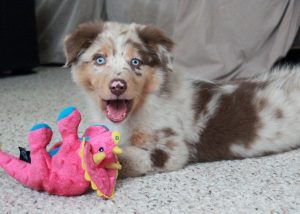 I looked for a red merle female Australian Shepherd.  I found plenty in the mid-west / central-west, but getting them to the east coast seemed problematic.  Reserving a puppy prior to it being born seemed like the only option.  I didn’t need a show quality dog, but I didn’t want to encourage back-yard breeders either.

I found a local breeder and sent them an email that we wanted to reserve a puppy in their upcoming litter in June.  We didn’t hear back immediately so we assumed that it was not meant to be.  Our house settlement was coming up quickly so we concentrated on packing and thinking about a new puppy went on the back burner.

About 2 weeks before our move date, I received an email from the local breeder that I had inquired with.  The litter that was to happen in June turned out to be a false pregnancy.  Discouraged, but thinking about it again, I did a brief search and found a female red merle that was a week old and available.  The breeder was only 4 hours away.  We reserved her that night. 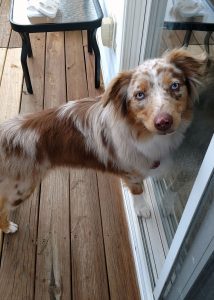 We were able to visit the litter of puppies when they were 5 or 6 weeks old.  After a 4 hour drive, we visited our new puppy and all her littermates.  Our puppy hid behind every piece of equipment in the barn and only came out when we cornered her.  But she cuddled into our arms so we knew she was just scared.  Our visit was the first time any of the puppies had ventured out of the barn.  Prior to that, they were strictly in the barn or in their pen.

We named our new puppy Lexi.  And she came to live with us when she was 8 weeks old.  She was very restless on her four-hour drive to our house.  But she eventually settled into my lap. 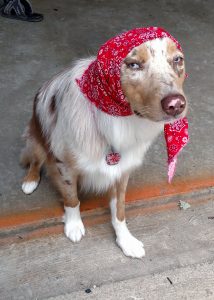 Elliot loved Lexi immediately.  And Lexi had several siblings, allowing her to interact with Elliot with no problem.  Elliot was very gentle with Lexi and played with her keeping in mind that she was very small.

After a few hours, Elliot did get a little grumpy.  He realized that she was staying and now he needed to share everything with this little girl. Most importantly, he knew he had to share Daddy. 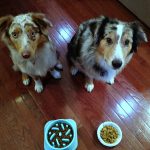 Part of the deal

When we decided to get a second dog, I requested that we adopt another kitten.  We had an open slot (after the death of Gabe)  and the house did seem empty with only 4 cats.  My main concern was having a cat that liked the dogs.  Most of our cats were much older when we first got Elliot and they did not adapt well to him.  I wanted at least one cat that got along with the dogs.  Plus the kitten would then be closer in age to the dogs than to any of the cats.  At the time our youngest cat was 4 years old.  This is how we eventually adopted Quinn.

Lexi is much more work than Elliot ever was.  All Australian Shepherds main concern is to make sure that they help you, please you and you are not angry with them.  Elliot always wants to please.  Lexi takes it to the next level.  She scolds Elliot when he does something wrong.  She is possessive of food, her toys, and your attention.  But she is a loving little girl that I just adore.  Most of her bad traits only started after she turned a year.  So we have been working for the last 6 months on trying to curb some of her possessive and dominant traits. 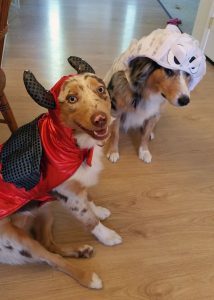