My ‘baby girl’ was not supposed to be ours.  My husband brought her home from work one day because some of his co-workers threatened to kill her if she was there the next day.  She is super affectionate and a big purr box.  She loves people and walks right up to anyone.  We fully intended to find her a new home.  Nomay was about 1 month older than Sam.  At the time, Sam was only 4 months old when Nomay showed up at our home.

Where the name comes from

My husband and I were married for about 6 months when Nomay came into our lives.  We honeymooned in Greece.  Fresh in my husband’s mind was the only phase that he knew in Greek.  Signome means ‘Excuse me’.  As my husband was driving this kitten home to our house to escape death, he called me to tell me that we would name her ‘Sig’ if he was a boy and ‘Nomay’ if it was a girl.  I knew as he was naming her, even before I saw her, that she was going to be a part of our family.

I could tell by looking at her, that she was a girl.  My husband didn’t know she was dilute torti.  She is actually mostly gray besides a few red streaks on her face and on her back.  99% of Tortoiseshell cats are female. 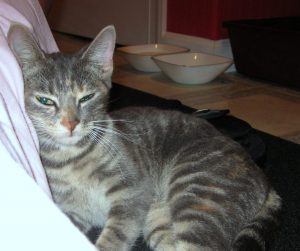 This girl was small and scrawny.  She purred almost immediately when I picked her up.  Nomay prefers any human over another animal.  She still does to this day.  Sitting on your lap is not her ideal spot, but she will headbutt you consistently if you continue petting her.  This means she doesn’t really sit but keeps moving around while you pet her.  Finally in her old age, as she is 9 years old, she will sit next to you or prop part of her front legs on you when you sit. Learning to be a lap sitter, after all these years.

I was nervous for Alex to meet Sam, but their meeting was lame compared to the meeting of Nomay and the boys.  Nomay threw such a fit that the boys forgot to be mad she was in ‘their’ house.   The squealing that came out of this little kitten’s mouth was unbelievable.  She wanted them and us to know that she’s in charge.  She is the first female cat that Alex accepted and he did it without any protest.  Nomay took a long time to warm up to the boys.  And even after she did, she doesn’t play with them.  She allows them to groom her occasionally, but otherwise, if they attempt to play, attack or chase, she screams, squeals and runs away. 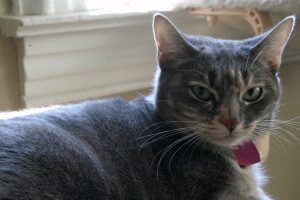 Alex loves Nomay, but Nomay acts aloof.  Sam and Nomay should be very close since they are basically the same age, but they were never very close.  Sam still likes to attack Nomay in the middle of the night.  I think Sam is trying to play with her.  But all we hear are squeals and hissing and then lots of running.  This, of course, wakes up the ever alert dogs and they break it up by their presence.

Mostly these three tolerated each other until the next one came along.  And then they all had a common enemy………