Once we bought our own home and I had no restrictions on the number of animals in my house, I followed through on fostering mommy cats and their babies.  It was over 2 years since I fostered any cats.   And while it gave me time to focus on my own pets, I missed seeing a kitten develop and form its own personality.  I also knew that I wanted to add a kitten to our family, so that it could grow up with Lexi.  The goal was a kitten that liked dogs. I was willing to wait for a kitten that loved dogs so I didn’t need to adopt out of the first litter.

My first pregnant mom started to give birth as I made plans to pick her up.  We decided she should stay at the shelter for another 24 hours so she could have her kittens in peace, or as much peace that you can get in the intake building.  I picked up Sara and her kittens the next day. 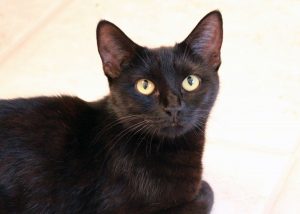 This was my first experience with this shelter on the fostering side of things.  I showed up with a carrier in hand and only my previous knowledge of what to expect.

With paperwork signed, we walked over to the intake building.  I waited outside while they collected my girl and the kids.  My paperwork said I was fostering a 9-month-old black female cat.  I have to admit that I was a bit disappointed.  Black cats make awesome pets, but I knew that she would be overlooked when trying to get adopted herself.

Once my momma & babies were crated, I glanced in and saw globs of color.  There was at least one Calico, one black and one black & white.  I was thrilled!  I am a sucker for Calico, Tortoiseshell and deep gray cats.

Sara mated with an orange male in order to produce this very colorful crew.  Once home, I inspected the kids and found 2 Calicos, a black & white and a tortoiseshell (not a black one).  The Torti’s colors were not very pronounced but she gained her color as she grew up.

I spent lots of time contemplating names for these babies.  Planning on keeping one eventually, I knew it would be from this litter with Calicos and Tortis to choose from.  Ham was named by me, but I had no thought of adopting her when I was naming her and her brother.  I wanted to name my next kitten with something I liked.

I eventually named them: 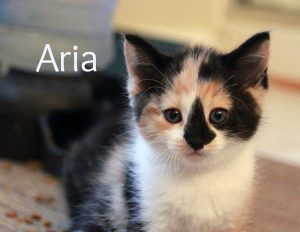 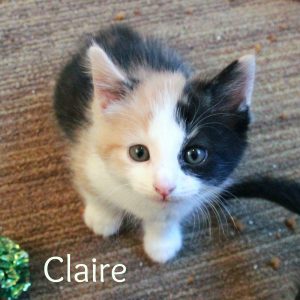 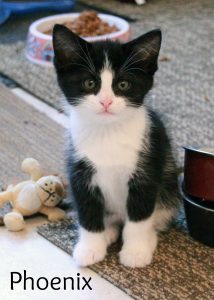 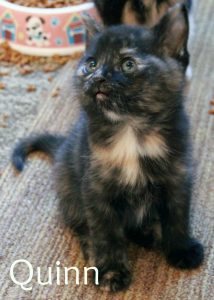 This litter developed normally.  No one was sick.  Momma was great and attended to their every need.  It was obviously her first litter.  She allowed me to handle the babies from Day 1, but she watched me like a hawk.  Calico and Torti’s have a reputation of being temperamental and demanding.  This crew did not show signs until they were closer to 6-7 weeks.  However, I did notice strong personality traits in Phoenix – the black & white boy.  He began using the litter box at 3 weeks old.  He made sure he covered his pee and helped the girls do it if they forgot.  All in all, they were very clean kittens.

Aria, Claire & Phoenix seemed to develop ahead of Quinn.  Quinn slept much of the time and didn’t begin interacting with me or the others until she was around 6-7 weeks old.  As I look back, I believe the others were just more advanced and Quinn was right on schedule. 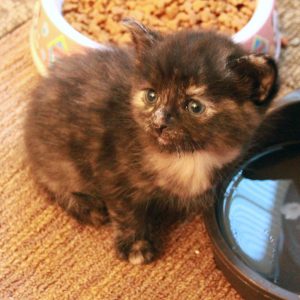 Quinn was my obvious choice to adopt because she was a Torti.  But since she did not interact too much with me or the other kittens, I leaned more towards one of the Calicos.  Aria was my favorite.  The triangle nose Calico was super playful, not scared of people and loved to crawl on me.

After their first FVRCP shot at 6 weeks, I introduced them to the dogs.  Aria ran and hid under the bed.  Claire hissed and spit.  Phoenix didn’t even come out of the bathroom.  Only Quinn, walked right up to Elliot and Lexi and tried to head butt them.  Of course, she was much smaller than them and couldn’t reach up to their heads.  But she leaped up so that she could attempt to head butt them.  Elliot & Lexi were curious and slightly scared, especially Lexi as she has never seen a kitten. 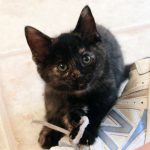 I experimented with the dog/cat meeting several times and on consecutive days and all but Quinn became more scared each day.  Quinn seemed to love dogs.  I knew that all the kittens were small enough, that I could choose any of them and they would eventually get used to the dogs.  But why do it?  She loved them.

In order to be ready for adoption at our shelter, the kittens must be 8 weeks old and weigh 2lbs 2oz to be spayed/neutered.  At 8 weeks, Aria, Claire & Phoenix were well over 2lb 2ozs. So I said goodbye to my little rug rats and Momma Sara.  Quinn stayed with me a few more weeks until she gained enough weight to be spayed.  This worked out great since I planned to adopt her anyway.

Quinn wins over the household 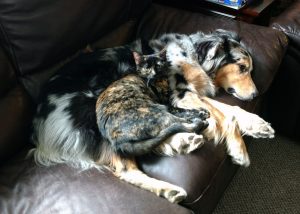 Quinn did not like being alone.  I did not expect this of her.  She was pretty much a loner from the time she was born.  But once the others left, she become a clingy kitten.  She slept with us in bed every night along with Elliot.  Elliot would never hurt her.  He is so gentle.  But, I kept close eye on her with Lexi and the other cats.  Lexi was still a puppy and I didn’t know if I could trust her not to eat Quinn.  And my older cats especially the boys have been known to hate any cat or kitten that comes into the house.  To my surprise, most of my cats liked her. 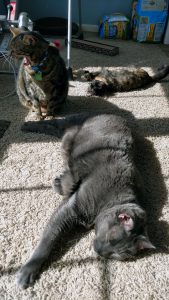 Alex is usually the biggest problem and Quinn walked over to him and head-butted him and he sniffed her butt and she was in!  My girl, Nomay put up the biggest fight against accepting her.  She growled and hissed at her.  But now 1.5 years later, they can touch noses but they keep their distance from each other.  Quinn gets rambunctious and tries to play with her.  Nomay flips out and makes all kinds of noise to discourage the playing.  But Quinn is not hurting her and Nomay doesn’t fight back except for making a ruckus.

Quinn is 1.5 years old and still loves the dogs more than the cats.  She thinks she is a dog.  When I let the dogs outside to go pee, she stands at the door waiting for their return and wondering why she can’t go out.  Quinn sits on Elliot and kneads on his stomach until she falls asleep.  Lexi plays with Quinn.  But this involves lots of squealing on Quinn’s part and Lexi trying to bite Quinn.  I’ve watched them plenty of times and both enjoy the encounter immensely.  But to watch it, some may be scared that Quinn is going to be eaten.  I can assure you that she can get away at any time, and she chooses to stay and play with her puppy dog. 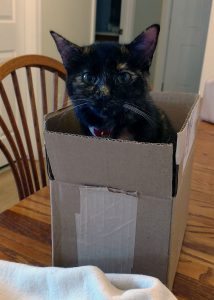 Because his sisters were Calico kittens and he was just a black & white boy, Phoenix was not adopted as fast as his sisters.  He became anxious in being alone and hated the cage at the shelter.  They placed him with another black & white boy to settle him down, but it did not help.  He continued to  cry and claw at the cage.  Eventually, he stressed himself out so much, that he developed pneumonia and died.  I did not know this was going on or I could have taken him back into foster.  It was sad for me and why I dislike fostering the plain kittens.  I don’t want to see them stuck in shelters just because they aren’t flashy.