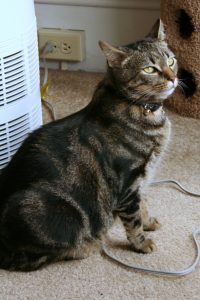 Sam is the most feral of my zoo.  But he did not start out that way.  He was a very brave kitten.  We purchased him at the same pet store that we got Alex.  It was almost the same situation……Three kittens in a cage out in front of the store.   Two were exactly like each other and the other one was slightly different.  I called my husband and he told me to pick one and bring it home.  Little did I know he was kidding.  But Sam became ours that day.

Sam was the bravest kitten. He had no fear of anyone or anything.  He walked around the Vet as if he needed to explore every inch of the place and nothing was going to get in his way.  Alex was less than thrilled by the invader in his house.  But Sam walked right up to Alex, again and again.  Sam was even allowed to curl up next to Alex once Alex had fallen asleep.  If Alex wasn’t asleep, there was much swatting and hissing. 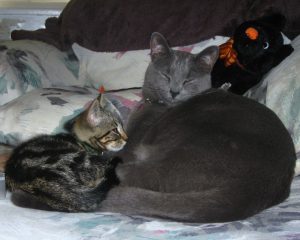 Sam had a bad experience while being neutered.  I’m not sure what happened, as the vet did not say anything went amiss.  But Sam came back a different cat.  Now, he is afraid of everything that makes noise and everything else that doesn’t.  He doesn’t want to be picked up.  He stands just far enough away so that you can pet the top of his head, but not close enough that you can grab his shoulders and scoop him up. 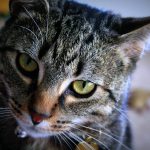 My old man, Alex would have been perfectly fine being an only pet.  He spent years trying to ignore and hate Sam.  Alex still to this day will not move to sit by Sam.  Sam must move to him.  But since both of them remain scared to the death of the dogs, they remain isolated in one of the two cat rooms in the house.   The cat rooms are their safe space where no dogs can enter, but the cats can leave anytime they want.  Alex & Sam reside for the most part in our upstairs cat room.  They explore the rest of the house at night or when the dogs take trips for long periods of time outside the house.  My husband affectionately calls Alex and Sam, the two grumpy old men in the balcony on the Muppets. 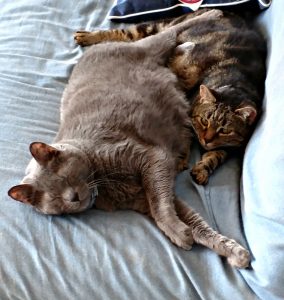