April 2 was my oldest cat’s birthday.  This year marks his 10th. My baby boy has been with me for almost a decade.  He is my alpha cat, my most difficult to please and the one that loves me the most.  His birthday celebration has been documented below….. 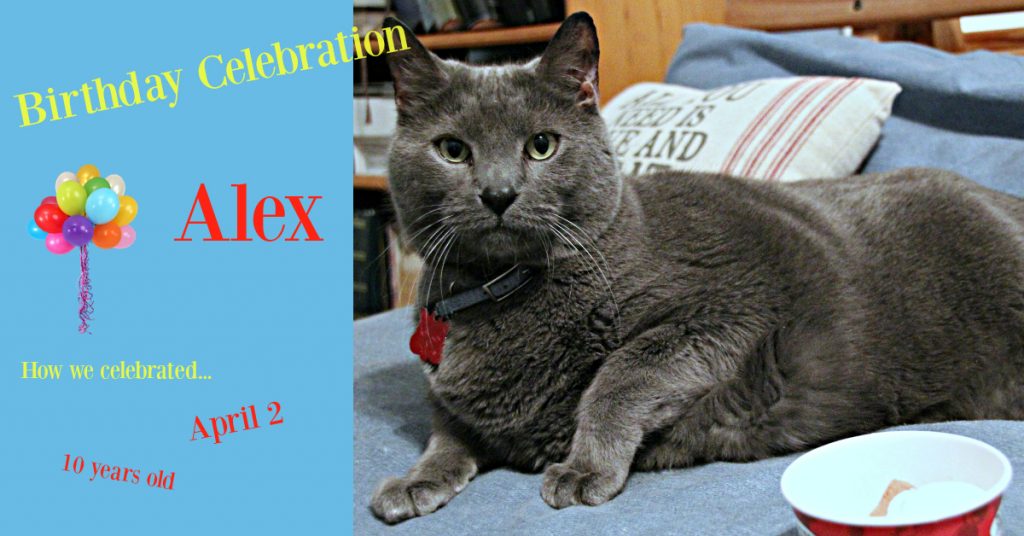 Not only is Alex the oldest of my zoo, but he also was an only pet for about a year.  He loved to be the only pet. Besides getting all the attention, we allowed many bad habits to form.  Mostly we didn’t understand they were bad until the next cat came along.

When he was younger, Alex rode in the car ‘for fun’ many times.  We did not use a carrier for him. He was happy being in my lap or sitting on the floor of the back seat.  Always the talker, he spoke to us while we rode.  He just wanted to let us know that he was still there.  His reward for being a good cat was always near the end. 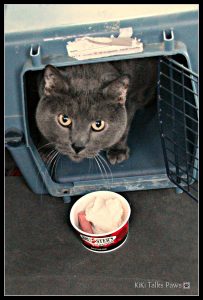 Our rides ended with a stop at the ice cream parlor.  Ordering at least a small bowl, Alex licked the bottom of the bowl and thus started his fascination with ice cream.  Even at home, once he heard the spoon hitting the bottom of the bowl, he knew it was his chance to steal a small sample of ice cream.  We did not give him a lot. And only later did we find out most cats are lactose intolerant. We stayed away from chocolate because I didn’t like chocolate.  Again later we found out that chocolate is not good for cats and dogs.  We lucked out with the information we didn’t know! 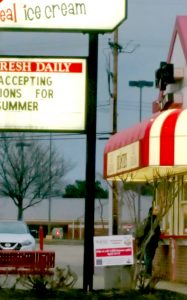 Since it was his 10th birthday, I thought I’d take him back to his younger years and go for a car ride for ice cream.  It did not work out as well as I’d hoped. He doesn’t ride in the car anymore unless he goes to the vet, so he was a little stressed out.  But not as bad as he could be.

I took him in the carrier because I can’t get him past the dogs on the 1st floor without scratching me to bits.  Even if we put the dogs outside, Alex believes they will return at a moment’s notice and squirm until I let him go.

His ice cream in hand, I opened the carrier for him to walk around the car and eat.  He sniffed his ice cream but remained in the carrier. Looking at me with his large eyes, I knew he wasn’t going to come out.  I ate my ice cream, waiting for him to relax, but it was not meant to be. 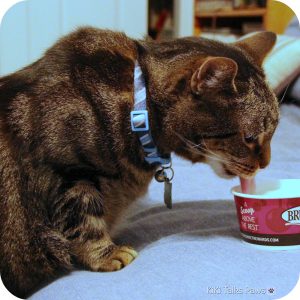 Finish up at home

I sealed up his ice cream, small vanilla with a dog biscuit, and traveled back to the house.  Once in the safety of his ‘cat room’, he took first dibs on the ice cream cup. Since Alex is the one on a special diet, none of the cats get treats.  Three of the remaining four cats in the house joined him in the cat room. They knew someone was getting a special treat. No one wanted to miss it. Plus Lexi sat guard at the cat gate.  She didn’t understand why a cat was getting the puppy dog ice cream that she normally gets.

Alex took a few licks and he was satisfied.  He is a grazing eater and doesn’t like to be watched while eating.  Once he had first dibs, everyone else took turns for a taste. Being the alpha male, he doesn’t care who gets any of his sloppy seconds, just as long as he eats what he wants.

Earlier in the day, I took time to sit with Alex in his safe ‘cat room’.  Out of all of the cats, Alex remains the most scared of the dogs after almost 4 years.  Together, we did some petting, purring and snuggling. Taking pictures is the most important part for me because that’s how I celebrate his birthday.  Check out other ways to celebrate your pet’s birthday. 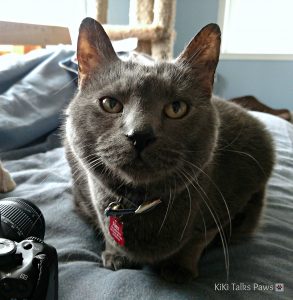