Why we BOUGHT our Australian Shepherd puppy? 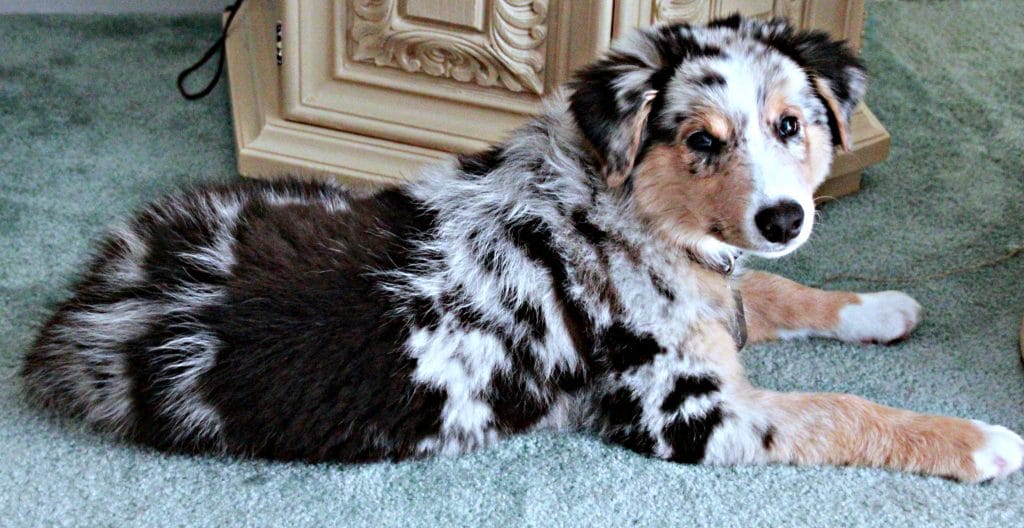 We bought our puppy!  I know everyone involved in rescue believes its taboo to buy a dog or puppy.  They insist that breeders are the reason that tons of dogs are euthanized daily.  However, some dog breeds just can’t be found in any large numbers in rescue……

I am a cat person.  My husband is a dog person.  When we met, moved in together and married, both of us were working long hours at our jobs.  Neither of us had time for a dog.  Cats were simpler.  I had accumulated 4 cats BEFORE I got involved in a rescue.  My husband said one day we would get a dog.  I knew this was inevitable, however, I kept putting it off.  Not because I disliked dogs, but because I didn’t know how to treat a dog.  My husband had a similar issue with the cats.   Our first two cats don’t like him very much because he tried to treat them like a dog.  Eventually, he learned and the rest of our cats might even like him. 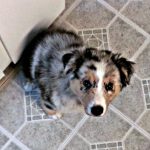 When talk of getting a dog turned serious, I started researching breeds.  I wanted to know what I was getting into.  My husband had a Cairn terrier while growing up, but I preferred medium to large dogs.  I would rather have another cat, then to get a small dog.

A co-worker had two Australian Shepherds with the merle coloring.  I loved the look of these dogs.  My research began on Aussies and I never really got much further than this.  I did look into the Australian Cattle dogs but preferred the longer hair.  Also, Australian Cattle Dogs were known to terrorize cats.  I figured that this was a trait that we could train them out of, especially if we got a puppy.  Australian Shepherds, too, are known for the herding traits, which could produce chasing of the cats.

My husband is very active.  He has undiagnosed ADHD so he is always moving and always doing something.  Both of his kids have ADHD so I know what it looks like.  He wanted a companion and someone to boss around.  Hiking and biking are two of his favorite activities (besides working) and I like neither of them.  He wanted a dog to be his buddy.  Aussies are extremely smart and highly trainable.    Their major drawback is that they get bored if not entertained.  They will become destructive if not mentally or physically stimulated. 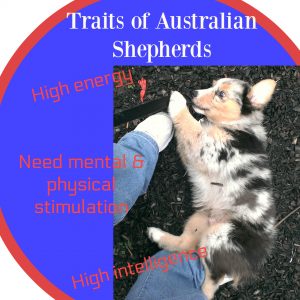 As I became more involved in my rescue, I saw how everyone cared about each animal in foster care.  The #1 rule for rescue is that Rescues and Shelters care about placing the dog or cat with the best potential adopter.  This means not everyone gets the animal that they desire, but that they adopt an animal that fits their lifestyle or personality better.  I knew with the small amount of Aussie Rescue dogs out there, we would have little chance of being the perfect adoptive family.

At that time, we had no fenced yard.  All of our grass had been replaced by mulch or patio.  We had no experience with Aussies.  I had no experience with dogs of any kind and my husband had very limited adult experience as a dog owner.  Both of us worked long hours.  Plus our Aussie would need to be cat-friendly so as not to kill or maim my 5 resident cats.  No rescue would have given us a second look.

There is no way, I would approve an application that came to our rescue with our criteria.  Plus, many breed specific rescues want you to have experience with that specific breed.  I still find it hard to imagine how rescues believe that they will stop breeders if they hold such high standards for all the foster animals they are trying to place.  I knew what we were getting into as an Aussie owner.  But I understand how it’s hard to believe someone that you don’t even know. 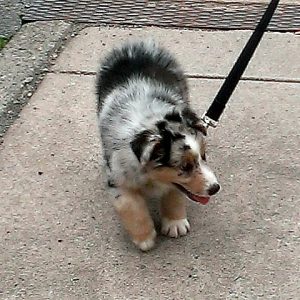 We did the absolute worst thing we could do when we purchased Elliot.  We bought him at a pet store in the mall.  I was actively engaged in a spay and neuter clinic for a Trap N Release program when I got the text from my husband.  I tried reasoning with him about our long hours and us not being ready.  But I knew this was going to be the time I gave in.  He had already texted me from this same pet store months earlier.  But this time, he showed me a Blue Merle male.  My goal was to adopt a Blue Merle female, so this was almost what we had agreed upon.

I confirmed with the store (if I could believe them) that he was not the product of the double merle gene.  He was 8 weeks old and scared out of his mind.  We got his official papers and took him home.  He didn’t know how to do anything.   It was like we were training him from scratch.  This did end up being a blessing, as we could train him the way that we wanted and didn’t have to retrain any bad habits.  He was extremely smart and wanted to please us.  He learned very quickly.  His worst hurtle was peeing outside.  His normal instinct was to circle before pooping, so we could catch him before this happened.  But peeing was a sudden squat and go. 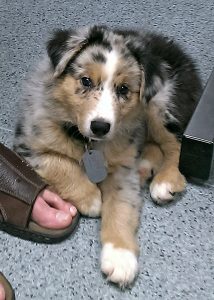 From the papers the pet store gave us, I looked up the breeder he came from.  There was almost nothing online about this.  They had no website and no entry of any sort online.  I believe he came from a puppy mill.  I don’t love him any less.  He is a very good, lovable and healthy dog.

I will probably not attempt another dog purchase at a pet store.  But, I don’t feel guilty about buying Elliot.  He turned out to be everything my husband wanted.  And I don’t feel guilty about buying Lexi from a breeder, as I was able to train her into everything that I wanted.  Hopefully, Elliot and Lexi will live long lives and we will be too old for a puppy when we are looking for another dog.   Now that we have Aussie experience, I would consider adopting an older dog or maybe even a lethal Aussie once our guys have passed on.

I encourage everyone to explore all options before making any type of decision.  Our experience with a breeder was very easy and seamless.  But, I find most dogs in rescue to be extremely lovable and adoptable.  A rescue dog just wasn’t what we wanted at the time.  Research your options in breeders, shelters or rescues.  You will know when your dog picks you out!